Medium height 5’ 8" Cobalt Blue Eyes Hair the color of blue heated metal. sad purposeful demeanor he hates undead, and those who make them. he will go out of his way to help those in need and enjoys a good game of Chess. raised in an abbey he is quit and has a simple way of life takes what he needs and gives to others as they need. he believes he has lived many past lives and has an uncanny calmness in battle especially against undead.

I Dryth “Synth was born on the battlefield of Kogren. Found by the clerics of Milani from a nearby abbey. The shining skin and the almost metallic sheen to my hair revealed my heritage immediately. Even in this accursed battle some good could come of it thought Kalain. She blessed my mother who had died valiantly fighting in the battle and returned with me to the abbey. It is said that those who follow Milani can sometimes remember happenings from even before their birth I can attest to that, even today I can remember the dead comrades of my mother rising against their will anger and fear in their eyes they turned against those they had fought alongside of for so many years.
As the dead rose those on the battlefield new they were lost but held the lines so Denston a small hamlet to the east could be evacuated, my mother’s fatigue and hesitation at seeing her friends, lifeless eyes as she shambled towards her left her vulnerable the cry could be heard across the field as the slash across her abdomen spilt and I fell gasping for air upon the field, her final act of valor, putting her friend to rest and covering me with her body.
The Abbey and especially Kalain were kind to me always, during my young years. they taught me the skills of healing, I learned quickly. As I aged they began to teach me how to defend myself against the undead with weapon and divine grace. Soon afterwards I would find myself testing those skills in battle defending the abbey.
I awoke with a start as the abbey bells began to ring wildly on a night black as coal! I could already hear the yells and screams of others as Kalain passed by I followed her ignoring her insistence that I stay put. As we came to the bulwark we could see the yard filled with undead and soldiers a calm came across me from what I am not sure but I had no fear in the battle, it was just and right to defend those around to this day I feel that calm in battles that are just. The brother, and sisters of the abbey fought hard and all thru the night by mornings light we found ourselves victorious but at a heavy cost. We learned later they were trying to kill Cassella a local Nobel who had been brought here for healing, and hiding. The consecrated ground we had defended and shed our blood on had been our strength and probably our shield in our small victory.
The abbey seeing what I had done sent me out to wander as is our custom. I assisted Cassella in a small way as she regained her throne and I was on the battle field of Montegue walking among the undead healing and helping those comrades in need. I was on the battlefield of Mythe as we finally defeated the necromancers that had so long ago kill my mother.
You ask why my powers are so strong against the undead. You ask why I have no fear against the undead. It has always been that way. 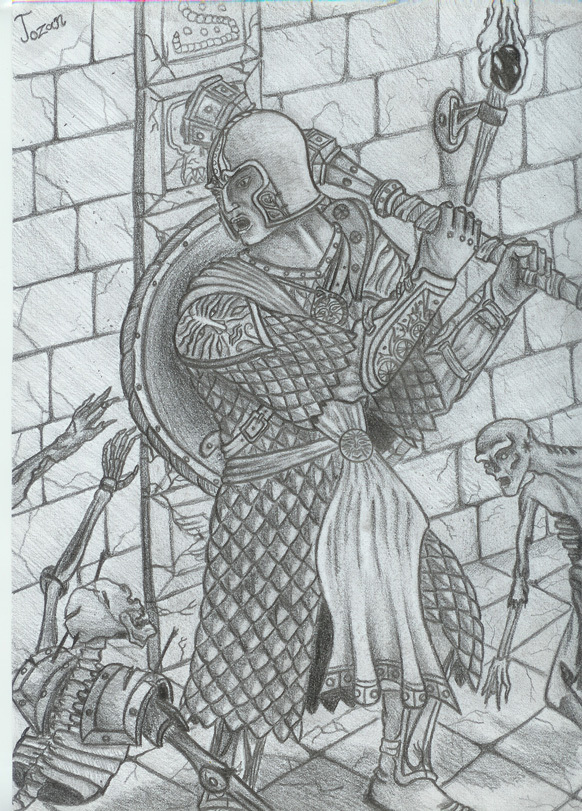